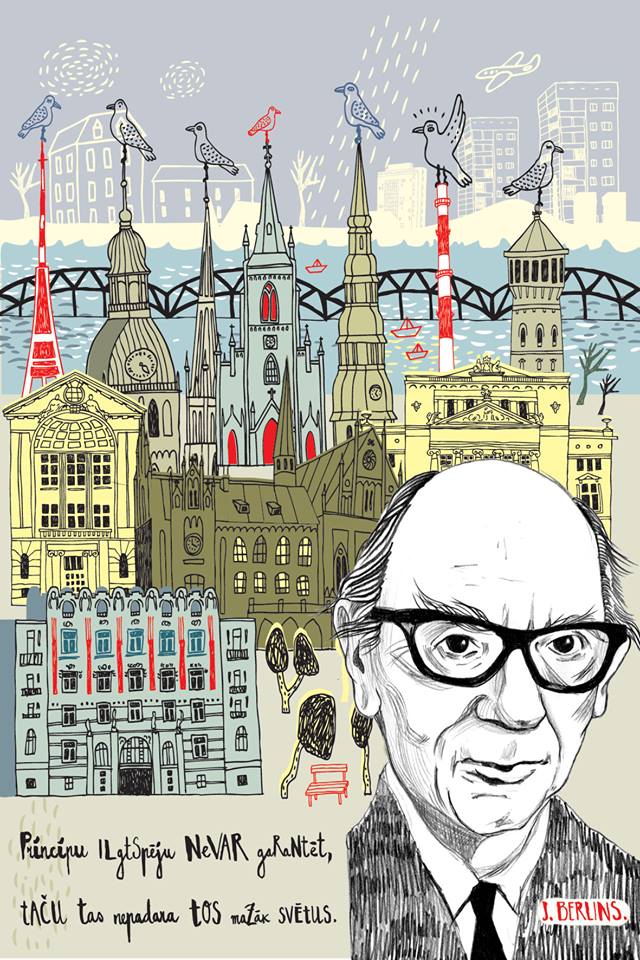 'I am proud and happy that some of my writings may see the light in the language of the country in which I was born and whose citizen I was during my early years in England. When one or two of my books were translated into Italian, I was acclaimed as a leading "Latvian philosopher". I do not wish to abjure this title, although basically I am afraid that I am an English writer. Still, the town of my birth is dear to me: I have many memories of it when it was a free city both before and after the First World War.' ISAIAH BERLIN

In a letter to Peter Brown, then Secretary of the British Academy, 16 May 1995

The milieu into which Isaiah was born in Riga in 1909 was thus a very extraordinary one. His family was wealthy, at the peak of its fortunes, and his parents had just moved into a new apartment in the fashionable Alberta iela – arguably the most beautiful street in Riga. The languages most commonly spoken in the house were Russian and German.

In the years before Isaiah’s birth, the Berlin family had already gained great renown in Riga society. Isaiah Berlin senior, Isaiah’s adoptive great-grandfather, after whom he was named, was more commonly known as Shaye. He came from a devout Orthodox Jewish family in Vitebsk, and lived in Riga until his death in 1908. In his lifetime he established one of the largest timber businesses in the Baltics and had been named a merchant of the First Guild and an honorary citizen. A pious and imperious, but also gregarious man, he was especially known as a philanthropist and generous contributor to public funds.

Isaiah’s father Mendel Berlin had moved to Riga as a teenager. Under his grandfather’s oversight, Mendel too became a timber merchant of the First Guild and later rose to become an honorary citizen and head of the Riga Association of Timber Merchants. Isaiah’s mother Marie Volshonok, by contrast, was born in Riga and lived in an observant Jewish household in Sarkandaugava. A woman of great talent, she transmitted both her longing for European culture and her strong and unfulfilled artistic desires to her son Isaiah. Mendel’s high status in Riga exempted him and his family from the discriminatory legislation restricting most Jewish citizens at the time.

In his later life, Isaiah was to make few statements about his time in Riga and never expressed explicit nostalgia for it. But some of the experiences he had here were formative ones that continued to shape his life and thought. Some impressions certainly did stick. Throughout his life he remembered and sang nursery rhymes and popular songs from his Riga childhood. As a young boy, his Latvian governess would take him out on leading strings, past the stone sphinxes that flanked the entrance of his house and around the quarter. Family holidays, as was the custom then, were commonly spent in Dubulti and other Baltic resorts.

In August 1914 the First World War broke out, forever changing life in Riga and in Europe at large. Riga was immediately blockaded, and soon the German armies were closing in on the city. In a climate of growing suspense, it was the Rigan Jews in particular who were exposed to suspicions and harassment by the Russian authorities. A mass deportation of the Baltic Jews was ordered, from which the Jews of Riga were only narrowly spared. After losing much of his timber stock in a fire and having been drawn into a lawsuit on trumped-up charges, in the summer of 1915 Mendel Berlin decided that it was safer to leave Riga for Western Russia and eventually Petrograd, where Isaiah was to spend the next five years of his life.

By 1919/20, having lived through the fall of Tsarism, the October Revolution and much of the Russian Civil War in Petrograd, the Berlins had grown weary of the increasing repression they experienced at the hands of the new Soviet regime. In October 1920 Isaiah’s father decided to leave the Soviet Union, and as he considered what the ideal destination could be, he ultimately settled in Riga, now the capital of the independent Latvian Republic. His memoirs reveal that, after the repression he had experienced in the Soviet Union, he expected greater freedom in democratic Latvia. The Berlins thus opted for Latvian nationality. However, the family’s experience upon arriving at the Latvian border was much more sobering, particularly due to the repeated bouts of anti-Semitism that they now encountered.

Having had to leave most of their possessions behind in the Soviet Union, the circumstances of their life in Riga were now very different ones. Instead of residing on Alberta iela, they lived in considerably more modest circumstances, probably at 86 Terbatas iela, where Isaiah was privately tutored for the duration of their stay. In February 1921 the Berlins left for England.

While the Berlins established themselves in England, their link to Riga was never entirely severed. Isaiah’s father Mendel upkept a timber business in Latvia for more than a decade. More importantly, however, most of Isaiah’s relatives continues to live in Riga, including Mendel’s father, Marie’s father and mother, her brothers and sisters, and a raft of young cousins. At least until 1937, Isaiah’s parents paid frequent and often lengthy visits to their relatives in Riga, and occasionally Isaiah appears to have accompanied them – his last visit there occurred in 1928. His memory of Riga was that of “a perfectly decent place in which people could be free and happy.”

A long exchange of letters between the Berlins in London and their family in Latvia occurred throughout the 1920s and 1930s. The last recorded letter from Riga arrived in August 1940. It was only after the clouds of war lifted in 1945 that the Berlins gained certainty about the fates of their relatives and friends in Riga – they had all been murdered during the Nazi occupation of Riga in 1941. Isaiah's aunt, Ida who had emigrated to Britain and then to Palestine with her husband before Nazi genocide unfolded, escaped unharmed. Another aunt who had moved to Moscow also survived.

The fate of his family in Riga shocked Isaiah, and reinforced his lifelong commitment against totalitarianism and political intolerance.

Isaiah Berlin and the Riga of His Time: http://berlins.lnb.lv/